News Alert: New Jamestown Municipal Water use restrictions as of 9/17/2020. Please read in the News below.

Free viewers are required for some of the attached documents.
They can be downloaded by clicking on the icons below. 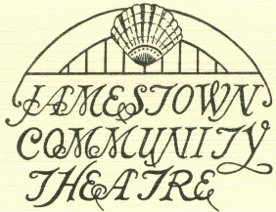 The Jamestown Community Theatre (JCT) is a non-profit organization committed to fostering the growth of arts, culture, social awareness, and the education of Jamestown's young people through the joint involvement of youth and adults in the theater experience.  Existing under the Jamestown Recreation Department and overseen by an active board of directors, all those who make up the cast and crew, from the backstage to lighting to set construction to costumes to promotions, are Jamestown residents.  Most of our productions are held in the Jamestown Recreation Center  at East Ferry.  For more information please visit our website here.

In 1990, two great admirers of the creative arts, Mary Wright and Patricia Vandal, were given $500 in start-up money by the Jamestown Substance Abuse Prevention Task Force to stage a play with the youth of Jamestown. Mary and Patti insisted on a cast and crew that included both adults and children, in order to foster positive relationships between generations. Thus it began; the first show was Peter Pan and included about forty-five cast members. The production was a success, and now twenty-five plays later, casts have sometimes been over one hundred people.

Many parents spend time rehearsing and acting on stage with their children, thereby bringing a new dimension to family life.  During each play, we try to include lessons, which are relevant to the play. When we did “Fiddler On The Roof,” we invited clergymen to join in a discussion of tolerance and prejudice.  With “The Sound of Music” director, Mary Wright spoke about peer pressure and the Nazi influence on the youth and adults in Germany.

Working on audition techniques, scene study, and character work, participants will become more acquainted with their individual strengths in public speaking and/or on stage, while they work on articulation, vocal projection, dialogue development, simple plays, monologues, short scenes, and improvisation.